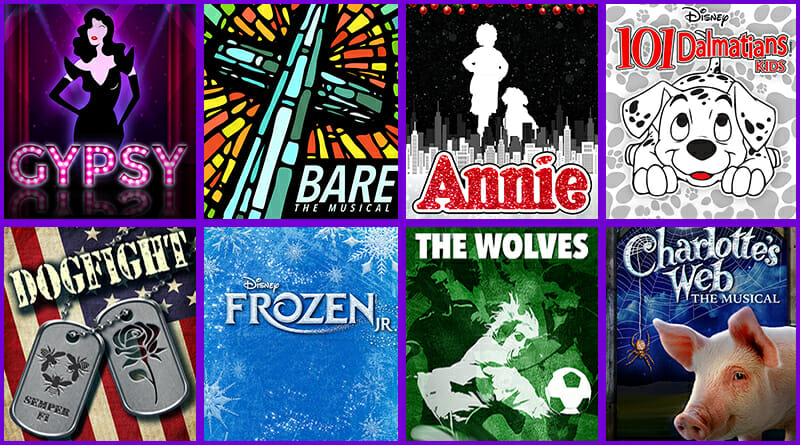 Spotlight Youth Theatre is proud to announce the 2019-2020 Season! Regarded by many theater professionals as the greatest musical ever created, Gypsy is the ultimate tale of an ambitious stage mother fighting for her daughters’ success … while secretly yearning for her own. Set all across America in the 1920s, when vaudeville was dying and burlesque was born, Arthur Laurents’ landmark show explores the world of two-bit show business with brass, humor, heart, and sophistication.

The celebrated score by Jule Styne and Stephen Sondheim boasts one glorious hit after another, including: “Let Me Entertain You,” “Some People,” “You’ll Never Get Away from Me,” “If Momma Was Married,” “All I Need Is the Girl,” “Everything’s Coming Up Roses,” “You Gotta Get A Gimmick,” “Small World,” and “Together Wherever We Go.” A group of high school seniors at a Catholic boarding school faces issues of sexuality and personal identity. As they struggle to come to terms with who they are, and who the world thinks they should be, they seek answers from their Church, their friends, and ultimately, from within themselves. Its rich, vibrant score draws on many styles of contemporary music. Based on the popular comic strip by Harold Gray, Annie has become a worldwide phenomenon and was the winner of seven Tony Awards, including Best Musical. The beloved book and score by Tony Award winners, Thomas Meehan, Charles Strouse, and Martin Charnin, features some of the greatest musical theatre hits ever written, including “Tomorrow.”

With equal measures of pluck and positivity, little orphan Annie charms everyone’s hearts despite a next-to-nothing start in 1930s New York City. She is determined to find the parents who abandoned her years ago on the doorstep of a New York City Orphanage that is run by the cruel, embittered Miss Hannigan. With the help of the other girls in the Orphanage, Annie escapes to the wondrous world of NYC. In adventure after fun-filled adventure, Annie foils Miss Hannigan’s evil machinations … and even befriends President Franklin Delano Roosevelt! She finds a new home and family in billionaire, Oliver Warbucks, his personal secretary, Grace Farrell, and a lovable mutt named Sandy. Music & Lyrics by Mel Leven, Randy Rogel, Richard Gibbs, Brian Smith, Dan Root, and Martin Lee Fuller
Book adapted by Marcy Heisler
Additional lyrics by Marcy Heisler
Music adapted and arranged by Bryan Louiselle
Based on the Screenplay by Bill Peet and the novel The Hundred and One Dalmatians by Dodie Smith

Disney’s classic animated tale of kidnapping villains and courageous puppies is adapted in this “fur-tastic” musical adventure. Disney’s 101 Dalmations Kids is a no-cut show that will be produced as part of Spotlight Youth Theatre’s Winter Break Camp, Dec. 12 through Jan. 3. The hauntingly beautiful musical Dogfight by Benj Pasek and Justin Paul (Dear Evan Hansen, The Greatest Showman) and Peter Duchan, was praised by countless critics and nominated for numerous awards, winning the Lucille Lortel Award for Best Musical. Based on the 1991 Warner Brothers film, Dogfight takes audiences on a romantic and heartbreaking theatrical journey that stays with you long after the performance.

It’s November 21, 1963. On the eve of their deployment to a small but growing conflict in Southeast Asia, three young Marines set out for one final boys’ night of debauchery, partying and maybe a little trouble. But, when Corporal Eddie Birdlace meets Rose, an awkward and idealistic waitress whom he enlists to win a cruel bet with his fellow recruits, she rewrites the rules of the game and teaches him the power of love and compassion. The enchanting modern classic from Disney is based on the 2018 Broadway musical, and brings Elsa, Anna, and the magical land of Arendelle to life, onstage. The show features all of the memorable songs from the animated film, with music and lyrics by Kristen Anderson-Lopez and Robert Lopez, plus five new songs written for the Broadway production.

A story of true love and acceptance between sisters, Frozen Jr. expands upon the emotional relationship and journey between Princesses Anna and Elsa. When faced with danger, the two discover their hidden potential and the powerful bond of sisterhood. With a cast of beloved characters and loaded with magic, adventure, and plenty of humor, Frozen Jr. is sure to thaw even the coldest heart! For its non-musical spring play, Spotlight is proud to present this finalist for the 2017 Pulitzer Prize for Drama, and winner of the 2015 Relentless Award for Playwriting.

Left quad. Right quad. Lunge. A girls indoor soccer team warms up. From the safety of their suburban stretch circle, the team navigates big questions and wages tiny battles with all the vim and vigor of a pack of adolescent warriors. A portrait of life, liberty, and the pursuit of happiness for nine American girls who just want to score some goals. Adapted by Joseph Robinette
Music & Lyrics by Charles Strouse
Based on the Book by E.B. White

This exciting, new musical version of Charlotte’s Web brings a new dimension to E.B. White’s beloved classic. With music and lyrics by Charles Strouse (Annie, Bye Bye Birdie) and book by Joseph Robinette (national award-winning children’s playwright) audiences will thrill to a musical score which includes “Eating,” Wilbur the pig’s humorous yet poignant song about growing up; “Who Says We Can’t Be Friends,” an enchanting duet between Wilbur and his new-found companion Charlotte; “Welcome to the Zuckerman Barn,” featuring all the story’s unforgettable animals in a hand-clapping, toe-tapping hoe-down; and “Summer,” a haunting, nostalgic chorus number which evokes a time and place from everyone’s childhood.

A Word about Racism and Intolerance

How theatre and the arts refute prejudices through storytelling.

Spotlight Thanks Cabaret for Change!