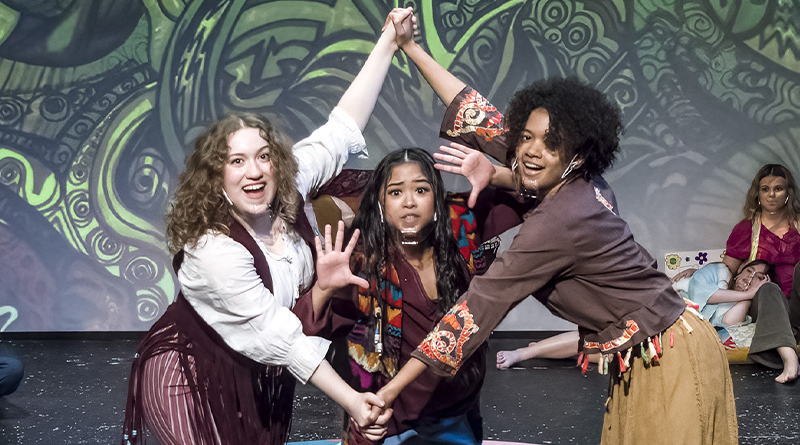 Below are hints and general information that might help you to understand the audition process for any show. Refer mainly to requirements for auditions for specific shows when they arise. Those requirements will be linked above, under “Coming Up,” when the information is available.

Auditions for plays and musicals in the Spotlight season are open to young performers up to the age of 19, depending on which show it is. Some shows may require limited age ranges depending on the material. The requirements to audition are posted for each separate show.

Prepare a head shot (photo of head and shoulders) for season play auditions. Believe it or not, this can be a worry free process. The directing team needs to remember who is who during casting. No one judges whether the photo came from a studio. A color printout is just fine.

To get the best head shot, follow these hints: An average shot is often better than your favorite shot. A zoomed-in or cropped view showing all of the head and shoulders is usually more recognizable than an arm’s-length photo taken very close to you. A relaxed smile or straight face beats your biggest smile for this purpose. To look three-dimensional, it’s better to turn head and shoulders very slightly (a few degrees to the side), with only your eyes aimed at the camera, instead of facing perfectly straight as if in a police mug shot. Have fun, but don’t stress over it.

An actor’s résumé does not need to be long. A single page is best, even if you’re an old pro. We know that first-timers and child actors often have limited info to include.

It is helpful to include specifics that matter for casting parts such as age and height, experience with performing arts, team activities, awards, etc. Mention special skills we might miss during auditions (juggling, acrobatics, guitar, celebrity impressions, etc.) that may come in handy while planning ahead for fun scenes.

Remember, if you’re new or have a short résumé, we still want you to audition.

Prior to auditions, check your calendar for any and all schedule conflicts between the audition date(s) and the scheduled dates of the show. We understand that everyone has possible conflicts with certain rehearsal dates. This is normal. Obviously, the fewer conflicts, the better.

The directors must know all of the excused absences that will be required prior to casting the show and scheduling the rehearsals, with no surprises saved for later. Normally, it is impossible to cast a performer if there are excessive conflicts, or conflicts with the final rehearsals or public performance dates.

Aside from some customized schedules, regular rehearsals can be expected to occur in late afternoon or evening after the usual daytime school hours, averaging three or four school nights per week plus irregular weekend hours.

Because not all cast are called to rehearse all scenes, dances, and/or songs, it is normal to have fewer rehearsals in the first weeks (with some cast requiring fewer hours than others), and more frequent rehearsals in the final weeks (when more scenes are combined). Where possible, rehearsals are also structured around schedule conflicts reported during auditions. So, it is impossible to know the schedule for each performer prior to casting.

The final week leading up to opening night (our “tech week”) is the heaviest schedule. Several hours are spent with full cast on both Saturday and Sunday, usually with scheduled mealtimes. At least three school nights in a row are used for dress and/or tech rehearsals prior to opening.

For most shows, there is still one night off even during tech week. We do not keep casts later than scheduled. Due to occasional “down time” between tasks and scenes, we also encourage cast members to bring homework with them to rehearsal to use all of their available time to their advantage.

Some plays require auditioning with a prepared monologue, and some don’t. If you know a specific character you want to play in the show, choose a 1-2 minute monologue (memorized is better than written) that resembles the style of that character.

If the audition requirements specify “comedic monologue” or “dramatic monologue,” it’s important to stick to the directions! If the directions are for an “appropriate” monologue, that means you’re expected to research the show. At the same time, feel free to show your range in both funny and serious pieces. Sometimes comedy has serious moments, and usually the best drama has funny moments. Showing honest emotions is not limited to the extremes, so look for any chance to play your character with a variety of thoughts and reactions that aren’t all played as one note.

Take time to select a “real” monologue from a published play that you read about, or already know. You’ll get more out of the experience than by improvising, or by quoting a scene from a popular movie. Here are a few resources for finding monologues online:

Most musicals require singing a short section of a song. Your choice of audition song matters. The directors want to hear if your voice and style will fit the show. Don’t choose a song from the same show, but do choose a song that fits the show. In other words, don’t sing a nursery song to audition for a rock opera. Don’t sing a current pop song to audition for an old classic musical.

Also, if you are aiming to play a specific character in the show, select a song that sounds the most like that character: a funny song for a comic role, or a love ballad for a romantic lead.

Auditions may call for sheet music or MP3 recordings, or a choice of either. Sheet music for auditions are sold commercially online. Musicnotes Audition Cuts and Performer Stuff are just a couple of examples, where cuts of individual songs cost a few dollars apiece. However, you can also find sheet music for popular songs in books available in music stores, in libraries, or among your musical friends and teachers.

To find an MP3 file of the song of your choice, again there are web sites where individual downloads are available, such as Karaoke Version. Many auditioners resort to YouTube or their musical friends to find the tracks they want.

Showing your ability to follow music is part of auditioning. Even though a capella singing is usually allowed at auditions, singing without music should be your last resort.

At some level, auditions are scary for even the most practiced and experienced performers. At Spotlight, we hope that auditions are a fun and educational process. Not everyone can get into every season play. That fact is hard for directors and cast members alike.

Remember that it’s normal for good performers not to make it into some shows. Usually, it’s just math — like when 60 performers audition for a cast of 20. Some shows call for particular mixes of ages, genders, vocal ranges, and so on. We prefer all the diversity we can get, and often make non-conforming casting decisions. Sometimes two excellent but similar performers are the top choices for one good role, after all others are cast. Often at Spotlight, there are wonderful actors, even those who have won awards for playing leads in other shows, who don’t make it into a particular cast.

Many performers build experience with other opportunities such as theatre camps, performance troupes, or vocal or dance lessons in order to win more parts with the skill and confidence that come from that experience. Some shows are geared especially to include opportunities for all skill levels, while others are highly competitive and may require more advanced skills to make it past the first audition.

Even if you’re new to this and perhaps go in expecting only to gain the experience of auditioning, it is worth it to learn from the examples of others, meet new people, and learn something about the theatre.

Our directors are always looking for new performers to join the Spotlight family and can’t wait for you to succeed!